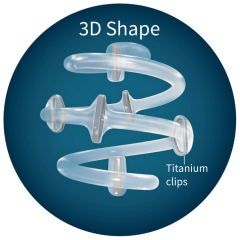 I recently attended the UF Multidisciplinary Symposium On Breast Disease and came away heartened and hopeful about new advances in treating breast cancer. One relatively new technique for patients who have a lumpectomy followed by radiation involves the use of a small, prosthetic device called BioZorb®.

Of the more than 200,000 women in the U.S. with early-stage breast cancer, about 60 percent undergo a lumpectomy with radiation. Typically, radiation is directed into the whole breast since finding the exact location from which the cancer was excised can be difficult. BioZorb®, created by Focal Therapeutics, was designed to improve the precision of those radiation treatments.

Shaped like a curlicue plastic shell about the size of a walnut, BioZorb® is a marking device that is placed at the tumor excision site by your surgeon during surgery. The device has six titanium clips which indicate to your radiation oncologist exactly where to direct the radiation beam. Thus, the tissue most needing radiation receives radiation. The whole breast still needs to receive radiation, but the “lumpectomy bed” will typically benefit from a boost of radiation, and BioZorb® ensures that the correct area receives the boost dose.

An article in the World Journal of Surgery reported that in a study of 110 patients with BioZorb®, the marker provided more accurate targeting in 95.7% of cases for radiation planning and treatments.

BioZorb® is naturally absorbed by the body over the course of about two years, but the metal clips remain. As a result, it’s easier for your doctor to accurately examine the exact tumor site during screening mammograms.

Breast Surgeons are finding an additional benefit of implanting BioZorb®. The BioZorb®     prosthetic implant provides a structure for the breast tissue and helps maintain the natural shape of the breast after surgery. The 3-D spiral shape of the marker is proving to be useful during restructuring of the breast as part of your lumpectomy, improving the contour of your breast and ultimately its cosmetic appearance..

Along with Hidden Scar Surgery—which removes the breast cancer while minimizing the visibility of the scar—BioZorb® offers yet another advanced technique for breast cancer surgeons to improve both the treatment and cosmetic outcome for their patients.

BioZorb® isn’t considered a good option for women with cancer that’s metastatic or late-stage breast cancer. Ask us if you are a candidate for BioZorb® by calling Dr. Margulies at 865-692-1610, or request a consultation online.

Dr. Aaron Margulies has a solo practice in Breast Surgical Oncology and General Surgery with an office at Tennova Turkey Creek Medical Center in West Knoxville, at Tennova North Knoxville Medical Center in Powell, at Jefferson Memorial Hospital and in Newport. His extensive research and expertise in the most advanced surgical treatments of breast cancer have distinguished him as a leader in the field. To learn more about Dr. Margulies’ compassionate surgical care approach visit www.aaronmd.com or call (865) 692-1610.