Breast Cancer in the Age of Genetics: Using DNA to Guide Treatment and Reduce Risk

A Presentation to the East Tennessee Association of Advanced Nurse Practitioners 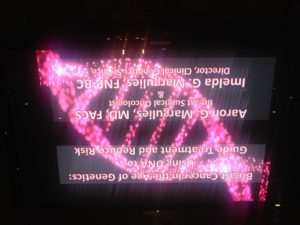 Joanne was watching Jurassic Park with her son, Tommy. It was his birthday and he wanted to watch an old movie?! Good grief! Joanne watched the screen as Mr. DNA described how the scientists at Jurassic Park had recreated dinosaurs. Then Joanne wondered if Mr. DNA could recreate dinosaurs, could Mr. DNA cure cancer?

How does cancer begin? Cells have two basic mechanisms by which they grow and each mechanism is directed by proteins and by the DNA that codes for those proteins. Proto-Oncogenes are DNA that produce proteins to stimulate cellular growth. Tumor Suppressor Genes are DNA that produce proteins that slow down growth. Cancer usually develops when the Proto-Oncogenes go bad and overstimulate the cell to grow or when the Tumor Suppressor Gene goes bad and can no longer slow down the growth. Think of it as the Ying and the Yang of cellular growth. Well, just like teenagers, cancers exhibit uncontrollable growth. They just sort of do what they want and won’t listen to Mom.

A clinical example is the Her2 gene, which produces the protein, Her2. Her2 is a receptor, a cell surface protein that stimulates the cells to grow. All human cells have Her2. For some reason in 12% of breast cancers, the Her2 gene gets copied and all of a sudden thousands upon thousands of copies of the Her2 receptor are produced. The breast cell receives a tremendous amount of signals to grow and this growth becomes uncontrollable. Boom! Breast Cancer. We now have drugs to kill Her2+ breast cancer and please read my blog post, Her2-Positive Breast Cancer for  a further discussion.

So, by knowing which DNA, or genes, are activated, we can predict what treatment will be most beneficial for a given breast cancer. We can do this either by looking at the proteins themselves, e.g. the estrogen receptor on the cell surface, or by looking at the gene itself, e.g. FISH test for Her2. OncotypeDX, which you can read about in this blog, also looks at the DNA in a breast cancer cell to help us guide treatment.

Likewise, knowing if someone has some bad DNA and a predisposition for cancer, we can reduce the chances of them developing cancer. BRCA is a collection of DNA, which is a healthy gene that everyone has. BRCA is a gene that codes for a protein that fixes, or repairs, DNA that is broken. If the BRCA gene is abnormal, then broken DNA does not get fixed. While most often broken DNA will lead to cell death (apoptosis), some of these cells will survive. These cells that survive will either have an oncogene or a tumor suppressor gene, and these cells will grow uncontrollably. These cells have become cancer. While the BRCA gene is in every cell in your body, the breast and ovaries are the most likely organs to develop cancer when the BRCA has gone bad. Therefore, by removing the breast and ovaries, we can prevent a lady from developing breast and ovarian cancer, if she has a bad DNA.

By knowing the DNA of a breast cancer, we can better treat that cancer with fewer side effects to the survivor. By knowing a lady’s DNA, we can predict her risk of developing cancer and recommend risk reducing strategies.

So, yes, Mr. DNA can prevent cancer, can cure cancer and can recreate dinosaurs. Joanne’s curiosity is what has led to many of the discoveries in biology over the past century. It is not the answers, but the questions that matter; ask the right question and you will find the answer.

Join Me This Weekend for the Real Men Wear Pink 2015 Campaign!