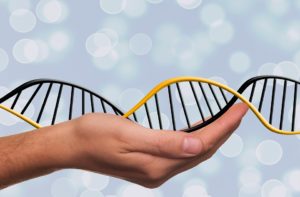 Medical guidelines about who should be advised to have genetic testing for hereditary breast or ovarian cancer have long been difficult to pin down. For example, most recently, the American Society of Breast Surgeons released updated guidelines advising that testing should be made available to all patients with a personal history of breast cancer.

Meanwhile, other groups take a more conservative approach, but most are at least in agreement that more women should have genetic testing than have been previously recommended.

At the heart of the genetic guidelines are genes called BRCA1 and BRCA2. When these BRCA genes are mutated, the body doesn’t repair damaged DNA as well. This increases the risk of breast, ovarian, and other types of cancers such as fallopian tube, peritoneal, or possibly pancreatic cancer.

Recent news about the testing explains that The U.S. Preventive Services Task Force has long recommended that doctors screen women if they have relatives with BRCA-related cancers, and to refer those who might benefit from gene testing to a genetic counselor to help them decide whether or not to have testing.

What’s new is that the recommendations issued by the task force and the American Society of Breast Surgeons have expanded to advise that more women receive genetic testing, including:

Why Do The New Guidelines Include More Women?

The updated guidelines come on the heels of research published in December 2018 showing that the previous National Comprehensive Cancer Network (NCCN) breast cancer genetic testing guidelines miss about half of people with a genetic mutation linked to breast cancer.

But why screen those who have already survived breast cancer, or have survived other cancers that may potentially be BRCA-related? After all, they’ve already been made aware that there’s a risk of recurrence.

One of the main reasons is that someone who was previously treated, perhaps years ago, for breast cancer may not have had genetic testing at that time, when it wasn’t as common. A genetic test now would still reveal if they carry a higher risk for ovarian cancer, or a higher than usual risk for another tumor in their remaining breast tissue.

And patients who have been newly with diagnosed breast cancer may be offered testing, which may affect the treatment protocols they receive through surgery, radiation, or systemic therapy.

The other major reason—which affects other family members in the younger generations—is that BRCA genes are hereditary. The children of those who carry the BRCA mutations have a 50% chance of also carrying the genetic mutations. As a result, these children will have an increased risk of developing breast and ovarian cancers. (See My mom has breast cancer. Is it genetic? Will I get breast cancer?)

Plus, because fathers pass down the BRCA genetic mutation at the same rate that mothers do—a 50% chance—it also impacts their sons’ and daughters’ genetic outlook.

At this point, it’s important to keep in mind that carrying the mutations does not mean these children will have cancer, by any means. However, it does give them information that can help them make choices that may decrease their risk of cancer down the road. (See Knowledge Is Power When It Comes To Genetic Testing: WBIR Segment.)

How Is Genetic Testing Done?

Genetic testing is performed by taking a blood sample, and testing actually checks for thousands of variants in the BRCA1 and BRCA2 genes known to increase breast and ovarian cancer. In addition, there are other predisposition breast cancer genes known to increase risk, with a panel of 20 or more genes that may be important for the client in a clinical genetic setting.

Fortunately, there are fewer barriers to genetic testing now than there have been before, and testing is less costly and is being offered by more labs. However, it’s critical to consult with a qualified genetic specialist.

Our opinion is that too few high-risk women ever learn if they harbor BRCA mutations. We agree with many cancer groups that have long recommended that all breast and ovarian cancer patients be tested for genetic mutations, even though several studies have found testing is done in less than a third.

Our Director of Clinical Genetics Service, Imelda G. Margulies, FNP, (who is also my beloved wife), can attest to how knowledge is power when it comes to genetic testing—both for women, men, and their children who may carry genetic mutations.

She explains that the purpose of genetic testing is to find out if you or your family members are at a higher risk for specific types of cancers. With that knowledge, your health can be monitored more proactively and you can take any appropriate steps to reduce your risks. Early detection and risk reduction measures could be lifesaving.

I am committed to serving breast cancer patients through my solo practice in Breast Surgical Oncology and General Surgery at offices in Tennova Turkey Creek Medical Center in West Knoxville, at Tennova North Knoxville Medical Center in Powell, at Jefferson Memorial Hospital, and in Newport. My extensive research and dedication to continual learning have distinguished me as a leader in the field of specialized breast cancer oncology. To learn more about my compassionate surgical care approach, visit www.aaronmd.com or call (865) 692-1610.