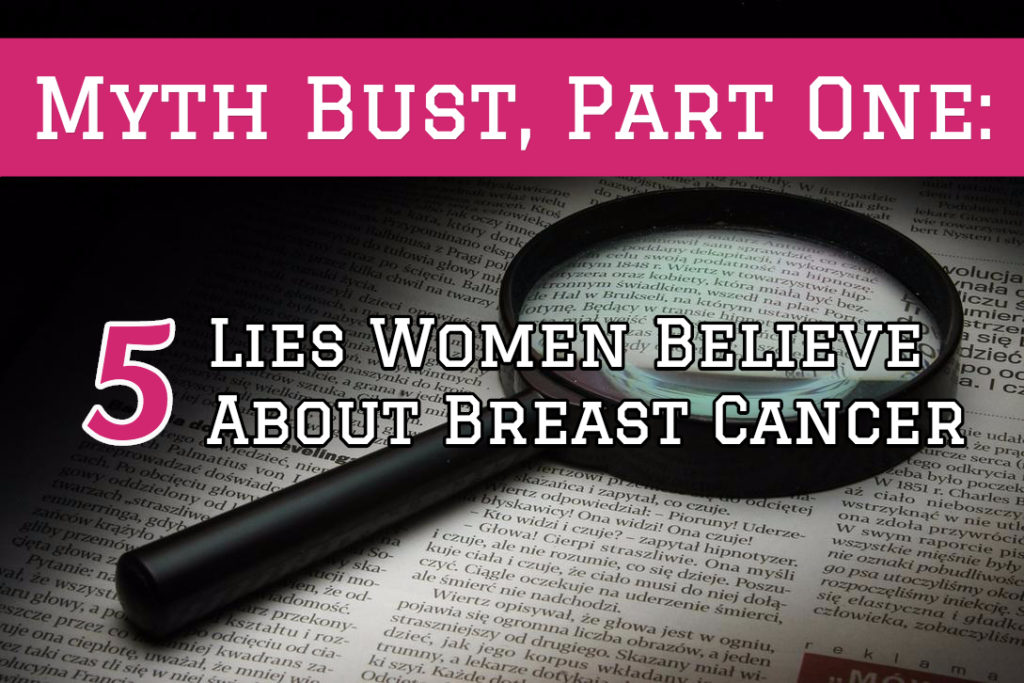 Cancer is a mystery. Like with many mysteries, society has invented many stories about breast cancer, much like ancient cultures invented myths to explain the ways of the world. Just as the movement of the stars and the change of the weather were mysteries to our ancestors, the growth of cancer and its causes remain a great mystery to us. However, we are getting closer to understanding it, which allows me to expose these five lies women believe about breast cancer:

People used to believe that cancer, like many infectious diseases, was contagious. While there are some cancers that are contagious, such as HPV and throat cancer, breast cancer is not. You will not catch breast cancer by talking to someone who has it, eating or drinking after her, or even hugging her. So go ahead, hold their hand, love on her, share a meal. You might just make her fight against breast cancer a little easier.

There is no scientific evidence whatsoever that states wearing antiperspirants or deodorant causes breast cancer. So, where did this story come from? While the most common location for a breast cancer is in the upper outer quadrant of the breast, we do not know why. Breast cancer rates began rising during the 19th century, which is around the same time wearing deodorant became popular. Because the armpit is close the upper outer quadrant of the breast, many have wrongly blamed deodorant for the increase in breast cancer patients.  There is no scientific evidence to support this hypothesis and much to refute it. All this to say: Please continue wearing deodorant!

This is also not true. This popular claim derived from the idea that compressing one’s breasts prevents the outflow of toxins and therefore increases the bra-wearer’s risk of breast cancer. This theory has been repudiated time and again. You may wear any bra you want and dress in any way you want and you will not increase your risk of breast cancer.

Myth #4: Living near power lines will increase your risk of breast cancer.

It has been said that certain towns in America had a higher cluster of breast cancer patients because those people lived near power lines. While intense radiation long term exposure to medical radiation (or a nuclear bomb) can certainly cause cancer, the radiation emitted from power lines is so extremely weak that it poses no risk of breast cancer or any other type of cancer development. Also, radiation dissipates rapidly. For example: Even if an x-ray machine is focused right at you from nine feet away, the dose of radiation you are exposed to is inconsequential.

Sugar causes breast cancer and every illness known to mankind. Hashtag, lies women believe. In reality, the biggest danger from sugar is that people keep eating and eating well past the point of satiation. Science has yet to find a direct link between eating refined sugar and cancer. However, there is a link between obesity and cancer. While you shouldn’t worry about getting breast cancer from eating a piece of cake or having a Coke, eat sweets in moderation and use your own good judgement. Because if you find yourself having a pack of Twinkies for breakfast, a 2-liter of soda by lunch, and finishing off a pack of Oreos after dinner, the effects of your food choices will leave you with a lot more to worry about than potential breast cancer.

Evelyn shared her concerns with her doctor and was relieved to know that the website she visited was not true. However, she did see a need for a lifestyle change and began making efforts toward improving her wellness. She signed up for an aerobic class at her gym and switched out her french fries for a salad at lunch. Every now and then, after the kids were asleep, she would indulge in that piece of cheesecake.