The Next Generation in Breast Cancer Prevention 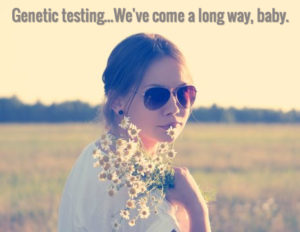 One in five breast cancers can be caused by an abnormal gene that is passed down from generation to generation.

If you knew you had one of these abnormal genes, then you have many choices available to reduce your risk of developing breast cancer or other cancers.

The most common abnormality, or genetic mutation is the BRCA gene. A mutated BRCA gene is the cause of perhaps of one of every seven breast cancers and maybe one out of every ten ovarian cancers. But there are so many more genes and their associated syndromes that can cause breast cancer: Lynch Syndrome, p53, Cowden’s Syndrome and many more.

It used to be that testing for each genetic abnormality would cost thousands of dollars. But now, with Next Generation Sequencing (a fancy, shmancy term for some molecular and genetic industrial process), we can test for all of the known genes for the same cost.

It used to be that if a breast cancer survivor had a high chance of having an abnormal gene, but she tested negative for the BRCA abnormality, we would have to classify her as an uninformative negative, that is, we had to admit that she had a genetic cause, but we had no idea what that cause was. We could not then tell her for what other cancers she was at risk, nor could we tell her whether her sisters or daughters were at similar risk.

But now, for the same cost, we can test for the vast majority of known genetic causes of breast cancer. Wow!

Myriad offers the myRisk 25-gene panel Hereditary Cancer Panel, Ambry offers BreastNext and many other companies are coming to market with their own versions. Here at the Knoxville Comprehensive Breast Center, we offer Myriad’s myRisk Next Generation testing through our High Risk Clinic, which is coordinated by Imelda G. Margulies, MSN, FNP-BC.

Imelda G. Margulies, MSN, FNP-BC, Family Nurse Practitioner, received advanced training in hereditary cancer risk assessment and cancer prevention at the City of Hope in Duarte, CA, having graduated from the Intensive Course in Cancer Risk Assessment in 2010. Mrs. Margulies is one of only two practitioners in the state of Tennessee to have graduated from the course.

Now, not only can we identify genetic risk factors for breast cancer, but Myriad’s myRisk can identify factors that may increase one’s risk of developing inherited risks for eight important cancers: breast, colorectal, ovarian, endometrial, gastric, pancreatic, melanoma and prostate.

Giving Back and Volunteering for the American Cancer Society and Strides