Why One Young Mother Choose A Double Mastectomy After DCIS Diagnosis 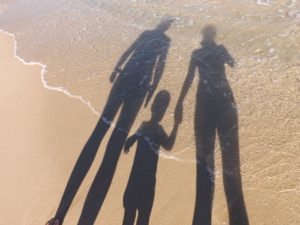 One of our beloved patients was recently featured in the Citizen Tribune about her experience with DCIS breast cancer. The information in this blog post was gathered from that article:

Whitney Danehy McGowen was 33 years old when she went for a regular checkup with her obstetrician in the late fall of 2017. She mentioned a slight change in her left breast and her obstetrician, while not overly concerned, suggested it was a good reason to get a baseline mammogram since she had a family history of breast cancer.

Her paternal grandmother lost her battle with breast cancer in the 1980s, and a paternal aunt had been diagnosed with DCIS (ductal carcinoma in situ), a non-invasive breast cancer. When she was diagnosed, her aunt had genetic testing that revealed she carried the genetic mutation for BRCA.

As Whitney would later learn, genetic testing showed that she too inherited the genetic mutation, which meant she had a 50/50 chance of having a similar diagnosis. This also meant that her 4-year-old son would have a 50% chance of carrying a genetic mutation, which would predispose him to a higher risk of developing certain cancers. This knowledge is invaluable to help them stay on top of early screenings and healthy lifestyle choices.

Six months after the baseline mammogram, Whitney had another mammogram to screen for any changes. The radiologist assigned to read Whitney’s mammogram noted that the cell alignment had changed and that there was now an arrangement of small, white spots on the x-ray.

Whitney said, “Every woman has calcifications, but the way mine were lining up gave her concern. Something looked suspicious.” The radiologist immediately ordered a biopsy, which confirmed that, like her aunt, Whitney had DCIS. The radiologist also scheduled an appointment for her to see Dr. Aaron Margulies at Tennova North in Knoxville.

Not wanting to take the risk of developing breast cancer in the other breast, Whitney opted for a double mastectomy.

Whitney said that Dr. Margulies broke everything down during their first meeting and drew out the surgical plans on a whiteboard. She said, “He was fantastic. He gave us a lot of information and ways to study up on it if I wanted.

“After the appointment, I got online and visited sites like the American Cancer Society (and stayed off the blogs and WebMD). That helped me see the plan the cancer society lists on its site is verbatim with what the doctor told me. Being able to see it verified in various places was a tremendous help. Thankfully, because we caught mine so early, I do not have to have chemo or radiation. The cancer was non-invasive, contained within the milk duct. That was a big plus—I had cancer without having to do the horrible treatments that everybody thinks about,” she said.

Following the surgery, the pathology report revealed that there was indeed a small cluster of cancer cells in her right breast, confirming that she absolutely made the right decision to have both breasts removed.

While Whitney dreaded looking at her incisions, when she finally did she said to herself, ‘That’s not as bad as I thought.’ She was aware that there are bras made especially for mastectomy patients, that make women feel normal when they put regular clothes back on. She has a six month reconstruction time frame and says that after that when she goes out in public no one will know she’s had a cancer diagnosis and a double mastectomy unless she tells them.

Now, Whitney is focused on healing and resuming her busy lifestyle with her husband, Matt, and their young son Patrick. She also plans to be an advocate about the importance of early detection.

Whitney said, “The only way this type of breast cancer is detected is through a mammogram. There is no lump to detect. The radiologist told me, ‘Sweetie, there is no lump … I doubt by the time you were 40, you would have had a lump.’”

“Mammograms are just so important. Doctors will start monitoring a woman with a strong family history. Then they can see changes over time,” she said, adding, “I think awareness is a huge part in the fight against not only breast cancer, but anything you might be dealing with, especially if it’s genetic. Women kind of dread getting their mammograms. Mine saved my life. I want women to advocate for their own personal health.”

(* to see the original article, written by Glenna Howington, that appeared in Wink Magazine in the Citizen Tribune, click here.)

If you’ve recently been diagnosed with breast cancer or are wondering if you should seek a second opinion on your diagnosis or surgical plan, Dr. Margulies is happy to consult with you.

Committed to serving breast cancer patients through his solo practice in Breast Surgical Oncology and General Surgery, Dr. Margulies has offices at Tennova Turkey Creek Medical Center in West Knoxville, at Tennova North Knoxville Medical Center in Powell, at Jefferson Memorial Hospital, and in Newport. His extensive research and dedication to continual learning have distinguished me as a leader in the field of specialized breast cancer oncology. To learn more about my compassionate surgical care approach, visit www.aaronmd.com or call (865) 692-1610.